Can Someone Explain What Happened?

Hello everyone, I am Storm. I don’t know how many of you even remember me because I haven’t been on in months. If you don’t know me, I’m not really an OG player, but I’ve done a few things. I got top 50 once, and I made the storm skin.
Anyways, since I’ve been gone, I have no idea what’s going on. First of all I have 2000000000000 pings from @ all?, but also I have no idea what this great forum battle thing is.
Basically I’m asking if someone can summarize what happened recently. 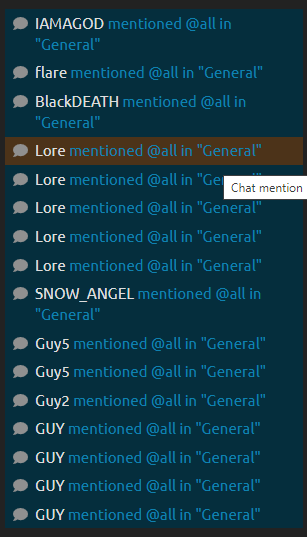 Well, what basically happened was a couple of people came in general chat and started spamming the no no notification(and other bad stuff). Those posts have since been deleted and the people who spammed have been banned. The Great Forum Battle is something that Hamm made, I don’t know if you were in a team or not, but I think Hamm can tell you.

You can look at my tutorial if you want to disable @/all pings.