Are you constantly dieing because you’re bad? Well then you came to the right place.
In this tutorial I will teach you how to pvp in swordbattle.io

Section 1: Low levels
In the low levels, I mainly try to level, kill some bots, but not really pvp. I personally don’t think fighting in the low levels is very effective, as pvp encounters only net you a small amount of coins from players your size, and killing bigger players is practically impossible if they know how to defend. However, you can find people with low health and [Throw] them to death. If another (higher-leveled) player has a lower skill level than you, you can also go for them.

Section 2: Evolutions (Tank+Warrior)
Tank: Tank gives you an advantage of size over berserker, making it superior. You have great defence, and can easily defend against knight and vampire. Make sure to watch out for teams. Try to level quickly, as you can still be very easily killed by knights at level 25-27.
Ability - see cornering
Warrior: Ah the best evolution by far. Its ability makes it great for cornering.

Section 3: Cornering (Tank+Warrior)
Cornering. One of the main reasons why Warrior is the superior evolution.
Step 1: Find a target. You don’t want the target to be low level, have it be someone that is a threat to you, (or a high amount of coins) as this will make your ability be on cooldown for 80 seconds, making you vulnerable.
Step 2: Get diaganol to them and a corner. 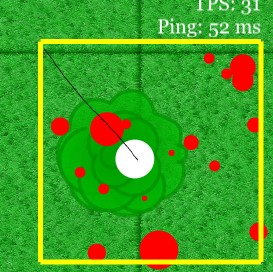 Step 3: Go towards them and force them to go into the corner. Be careful with speed evolutions, (Vampire, Knight, and Berserker), as they can use their ability to escape.

Random tip: If you see on the minimap that a warrior/tank is using their ability, go for them! They will have their ability on cooldown

Step 5: Once they are sufficiently close to the corner, (you can still hit them even if you hit them once) merely activate your ability and kill them, they won’t be able to escape.

Section 4: Feinting
Feinting. The most important part of high level pvp. All you have to do to feint is stutter your movements. When you are approaching an enemy and are about to get in range of them, just go backwards for a half second and then go forward. This will make them attack but not actually hit you. You can then hit them without fear of them hitting you first, because their hit is on cooldown.

Section 5: Settings
I recommend using mouse + keys, as it is easier than constantly moving your mouse. You also move in other directions when activating abilities, chatting, etc.

Random Tip: Make sure to always be [Throw]ing whenever your cooldown is off! The extra damage is crucial.

Keep in mind, I’m just a lowly 5m player, I’m sure Acol would have much better tips than me, but this is what I’ve learned in my swordbattle journey. If you have any tips for me, make sure to reply to this post and tell me.

just adding a bit from what I, (only 2 mil), have learned. Before pvp or pve, go for green and red chests, as they can level you up several times at early levels, without the risk of dying three seconds in. also, if you’re bad at pvp, evo benefits change. For the berserker, you can run easier, and for the tank, you can heal quicker. it all depends on how you play.

5m player, I’m sure Acol would have much better tips than me

i mean, if anyone ANGEL or harshitt would have more experience. acol is not the best at pvp, but rlly good at grinding (no offense)
also amazing tutorial!

note: if you have been using the mouse, don’t switch to mouse and keys! it won’t help
also, look for yourself to see which evo is better.

don’t switch to mouse and keys!

I think that’s more of a personal preference. I personally suck with just mouse since I can’t combo as well, so I use mouse + keys.

(If you are wondering how to change this, you can do so via settings (bottom left))

I mean you are kinda good

Me personally and think I’m good at PVP and think I’m pro I’m sure try to be patient and be smart of all of the moves that you do like the hitting delay and I’ve seen a lot of players they start spamming space when you are in view range of them so try not to spam a lot spam when reaching but don’t dry he nerfed it. I would use the corner strat it is good but if you are fighting tank just check if he already used his power up then you wont kill him in corner by using your power up. Another thing don’t be toxic then the community wont love you and always wouldn’t team. If I was a new player I should suggest to get a teammate but I don’t really care on teammate since I kill 1v3 teamers 1v3 would take some time and you really need to be patient
And always pick a appropriate name in the game seen a lot of bad names

i said if you have been using just mouse
then don’t switch, because it will be hard to adjust

i consider myself middle class at pvp

also, if a tank uses their powerup they can still be killed if they are low enough.
I’ve done it like 10 times

i try to consider myself an higher class? maybe not the best? but higher than a lot.

fair i do a good amount of pvp with players higher then me other then that i dont get worried in a battle unless im going against harsh, dev3x, cosmic, angel,cvrey,and a few others other then that i just say im going to kill #1 on leader board bye

Zacherflower is also rlly good, along with catman, and witherking is pretty good too