How to beat acol 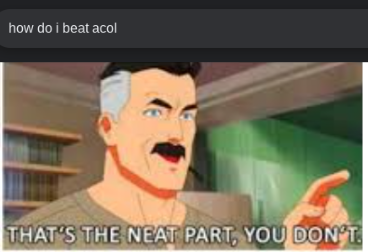 faxs i played agianist him i got sacred and ket hin kill me i don’t think he know but I also saw acol say god bless that kid. GUYS acol said smth nice

i can’t remember what acol once said to me, but i think it was about me being a demon or smthing. either way, he didn’t kill me for about 20 seconds

lucky but y is ur pfp hidden

idk maybe its cause of the wifi issues i’ve had?

he sed mastermind acol was forcing him to kill me

i think i know but i dont wanna tell