Ever since the launch of swordbattle, the main problem is always one thing.

I’ve pondered the solution to this simple issue many times.

Is it because of the messy code? 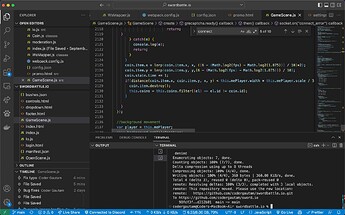 Or is it because of how poorly optimized it is?

Or is deeper… way deeper than the game itself…?

I’ve tried everything, everything I could to combat this issue.

To destroy lag once and for all…

What is this man talking about?

I don’t want to make this super long and boring

I’m re making the entire game

But hear me out.

I think the pros of rewriting the game far outweighs the cons.

For example, rewriting the game will allow for easier and faster updates, since the code will be cleaner and much more easier to work with.

Also, it would really help with lag, since I know how I can write this code more efficiently.

Working on the current code is a p a i n, and I barely understand what half of it means, since it was sloppily pulled together and not done cleanly.

This time, I will do it right. I call this project…

Alright now for the big question

How long will this take?!

My goal is to devote all my focus on just this, while this is happening.

I am saying around a month, give or take a few weeks.

I would say this is a great investment, for a better swordbattle

This thread will be updated with progress, as much as possible.

NOTE: The halloween update won’t be any way affected by this, that is going on as intended.

Feel free to ask me any questions below

i know you guys don’t want this, trust me

it will be good

A public server where you can try it out has been released! Check it out here

Yes it will be delayed, but for the better good, clans would be much better with a less lag game

This Is So Damn Cool

ok but seriously, if there is gonna be a lot faster updates with the new code i will be so happy

im sure the game will be much better: )

so like the regular swordbattle will still be running right???

If not ima be asaddd litle potato

will our accounts be saved? and our progress???

yes, of course they will be

will our accounts be saved? and our progress???

Yes, everything will be saved.

so like the regular swordbattle will still be running right???

When the new swordbattle comes out, the current version will be removed, but you can always custom host it from Github

Will u create a new github eepository or changes to exidting one?
And respond to dms

I’m working on the update in a different branch

will the game still be the same links???